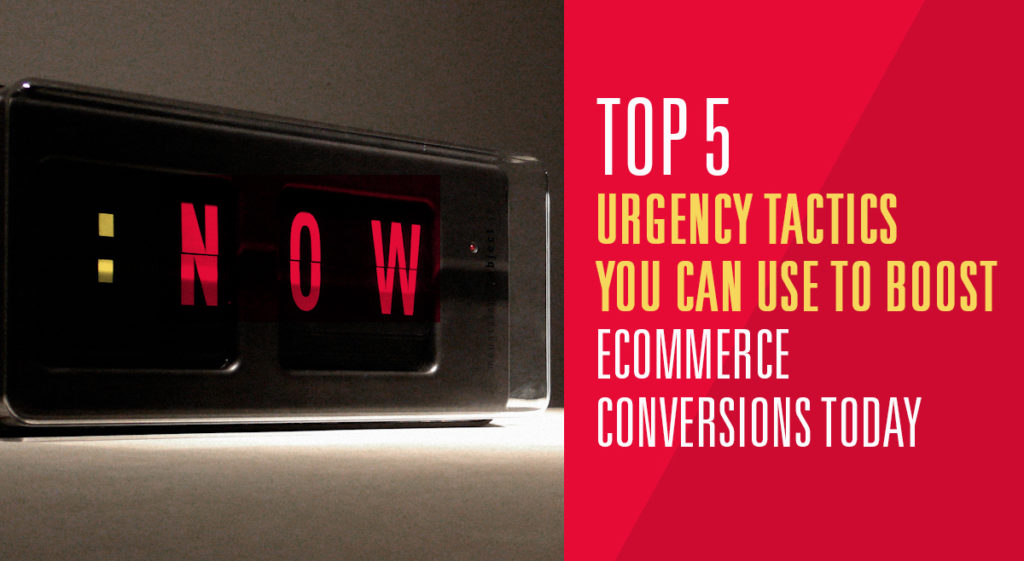 I think a lot about ecommerce conversion optimization. If you’re marketing an ecommerce shop, you probably do too—or you should.

No matter how much traffic your shop has, there are steps you can take to optimize your site.

One important tactic you can test is urgency.

Urgency is one of the oldest tricks in a marketer’s playbook. You’ve seen it in action before:

But how well does it work? In what scenarios does it work best, and when does it fall flat? Turns out, there’s a science to urgency as well as an art to execution.

How Urgency Helped Increase Sales By 332%: A Case Study

There have been many impressive CRO case studies about adding urgency, but one I really like is from Marcus Taylor of Venture Harbour

In 2012, he launched a kind of Groupon deal for musicians, where he gave away $1,250 worth of products, including recording time, iTunes distribution, and a guitar string endorsement deal for just $69 for 100 hours only. There were only 5,000 packages available, so this created some real urgency opportunities.

Below are the two variations he tested. The only difference is that Variation B showed how many packages had been purchased and had a countdown timer.

As Marcus wrote, “This is one of the most impactful A/B tests I’ve ever run. The conversion rate of Variation B was almost 3x that of Variation A.”

After implementing the variation to all users, his analytics showed an increase from ~3.5% to ~10%:

Pretty compelling stuff, but what’s the underlying mechanism here? Why does it work so well?

Why Does Urgency Work?

Urgency has a long precedent as an effective tactic for copywriters. In the AdWeek Copywriting Handbook, Joseph Sugarman wrote, “you’ve got to provide prospects with an incentive or reason to buy now. In fact, if you do your job right, customers have to feel guilty if they don’t buy right now.”

If you’ve been in marketing long enough, you’ve probably read Robert Cialdini’s seminal book, Influence. And you might remember his scarcity principle: “opportunities seem more valuable to us when their availability is limited.”

A study conducted in 1975 showed this effect. Researchers had two identical glass jars of cookies, one with ten cookies in it and one with two. Though the cookies and the jars were identical, participants valued the cookies in the almost empty jar more.“

Limited quantities (as ModCloth shows on its category pages) also imply an item is popular and desired by others, which serves as a bit of a social proof mechanism too:

Let’s look into some different types of urgency. Specifically, types you can use in ecommerce.

5 Types of Urgency in ecommerce 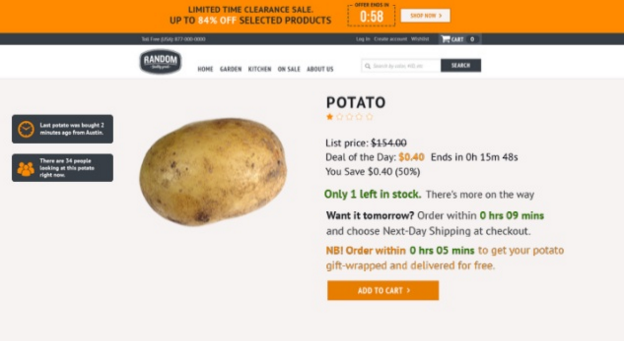 You see this all the time with ecommerce stores. Example from Granify: 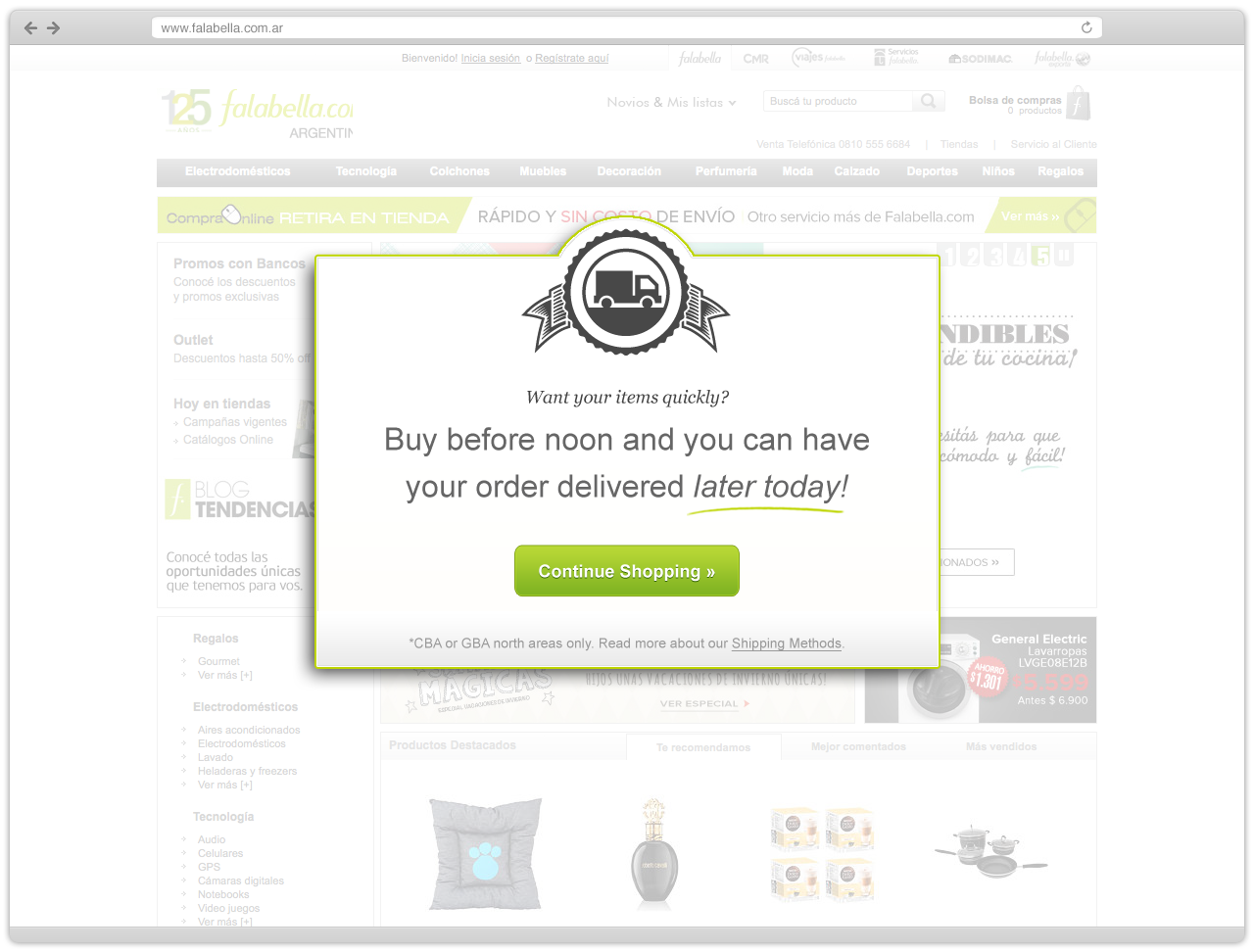 And, of course, Amazon uses this tactic on all their product pages:

Limited time offers are very common, and it’s a tactic quite similar to the above tactic.

Basically, you can run a sale, give a discount, or offer certain items as limited time offers for a certain time period. One of the most common ways ecommerce sites implement this is targeted popups that introduce visitors to an offer on the site. Here’s an example of a behaviorally triggered popup using Granify: 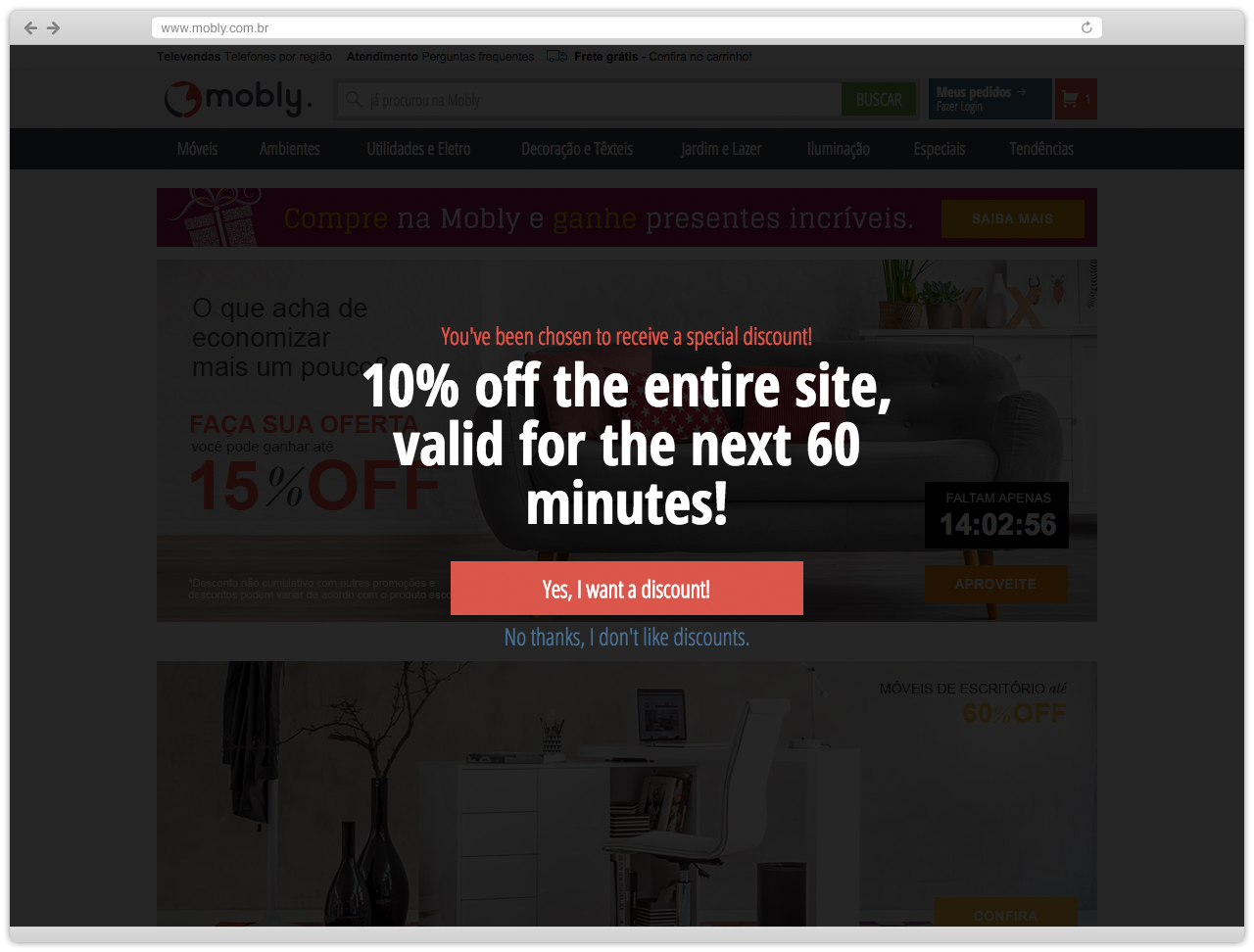 Other times, there are limited time sales on particular items. They’re often not advertised blatantly or in a general way like the popup example above but are effective because of the implicit intent of someone landing on the particular product page.

Something like this is easy to implement. Here’s an example: 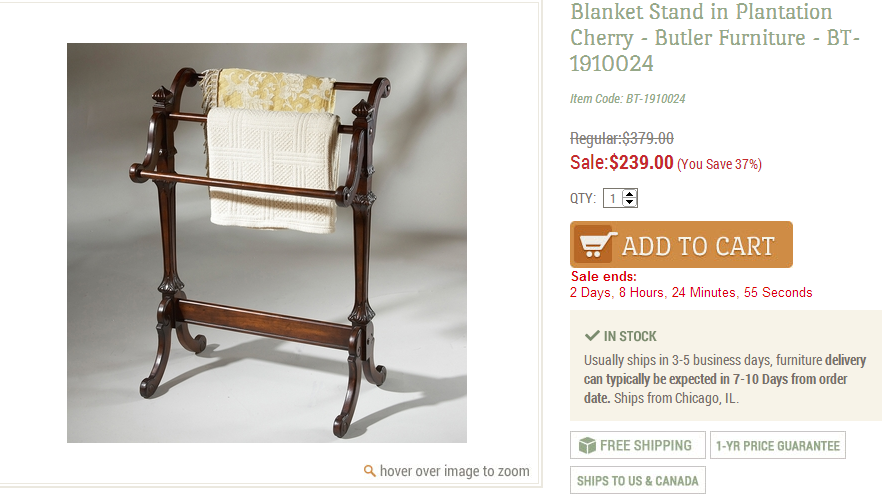 Here’s another example from Granify of a site-wide discount, but this one isn’t just a pop-up a customer can exit out of. It’s a timer that follows them with the offer while they shop. This is a tactic that can be quite effective. 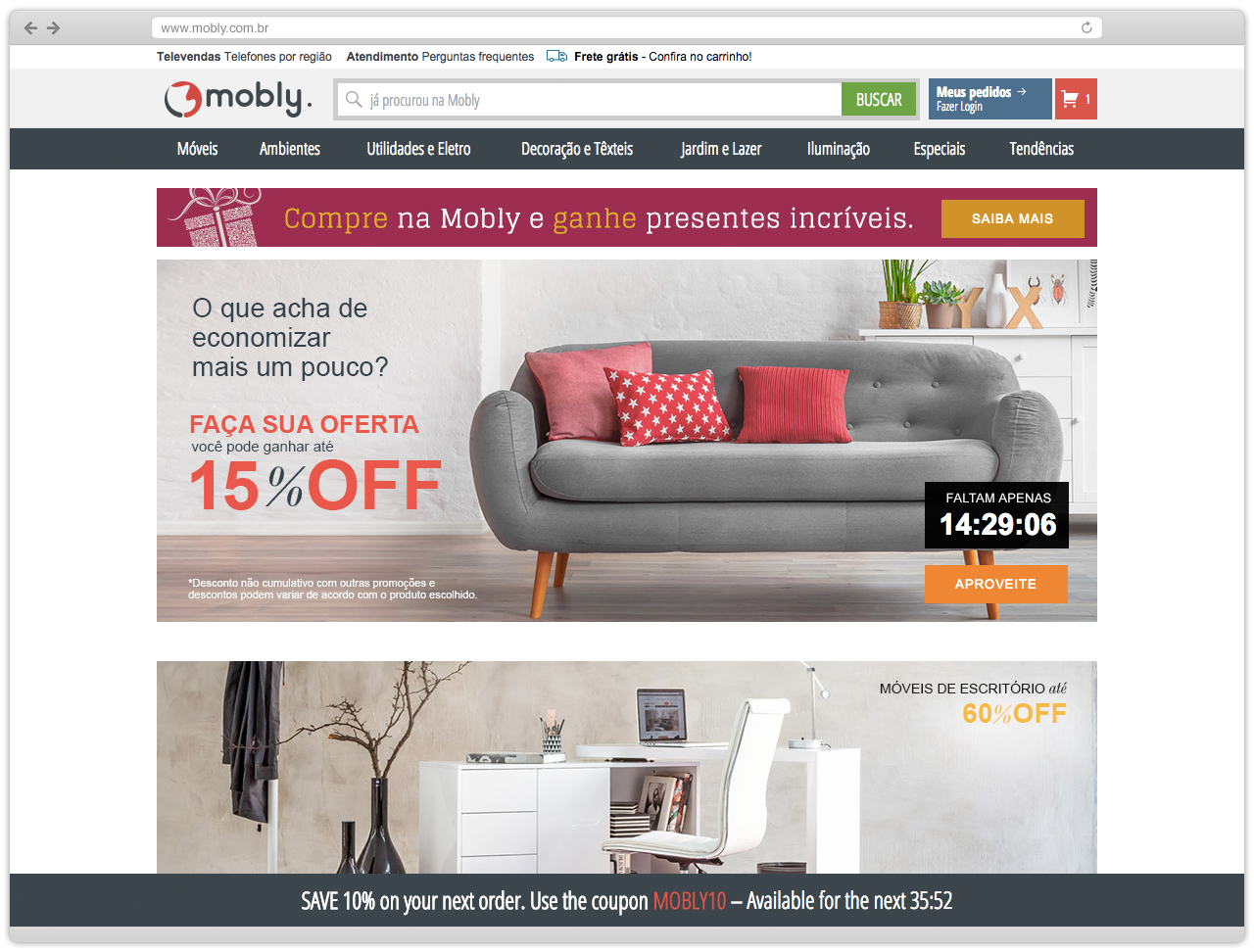 Now instead of your visitor leaving and maybe purchasing next time or the time after, they’re incentivized to do it right now.

Though this isn’t as applicable to ecommerce (usually) as it is to SaaS or lead generation, if you’re running an event that has an actual live deadline, then your urgency is already built in. It’s your job to make that time constraint explicit. Marketizator’s landing pages for their webinars do a great job:

Both of the last two tactics are strengthened by a countdown timer that works in real-time. This way the prospect can physically see the offer is running out, instead of something static like “only good until midnight.”

You can code a custom solution if you’d like—and many landing page tools can do this—or you can use one of the following:

Limited edition items, while more of a strategic decision than simply implementing a timer, are a great way to introduce implicit urgency.

Think about ugly Christmas sweaters. While you can buy them year round, some shops, like ModCloth, only sell them for a set number of months before Christmas. 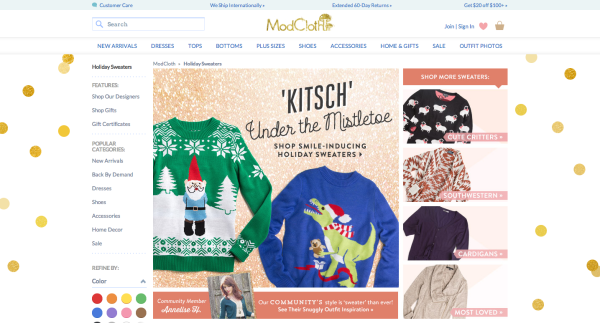 This is applicable for any seasonal product line, by the way. Chubbies Shorts is the grandmaster of seasonal urgency. They run a special for Julyber Monday every year where they offer a ton of limited edition merchandise.

They’re also awesome at limited edition items in general. They consistently update their site with new arrivals, which are often short-term experiments and might disappear in a few months (or not). 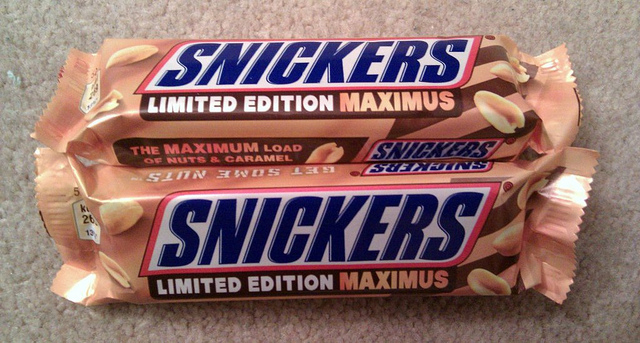 Quantity-based urgency tactics are even easier to implement, as you’ll naturally have a limit on your inventory unless you’re selling digital/information products, which we’ll touch on later.

One of the easiest things you can do is list how many items are left on product pages. The result is that a consumer feels, for example, they better buy this hammock from Hammock Town because there are only a few left.

Here’s another example of a product page alerting the customer that the item is in low stock. This one doesn’t give an exact number, but the visual hierarchy on the page gives prominence to the message. 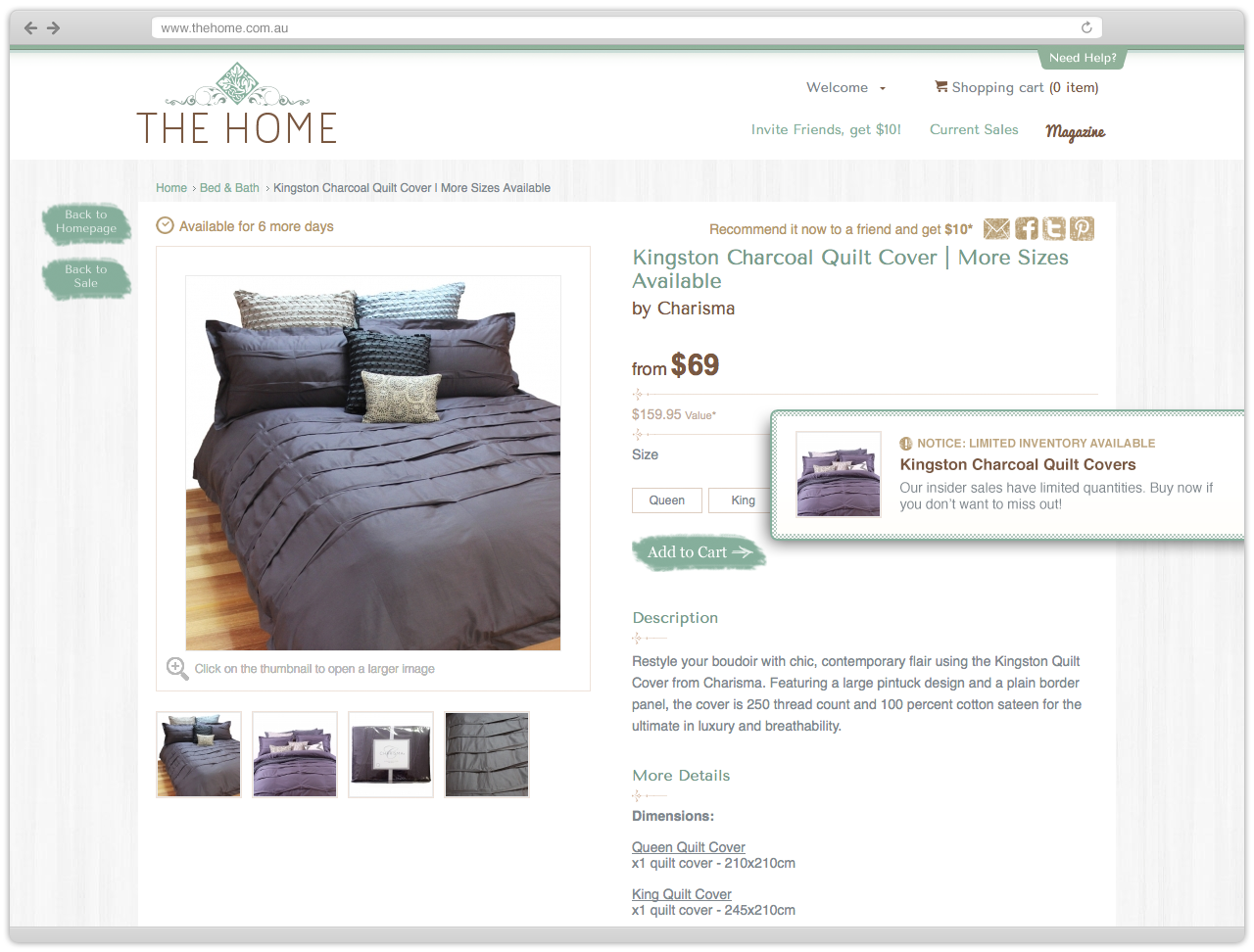 You can also draw attention to low stock items. Granify uses behavioral data to craft triggered popups to alert users that an item in their cart is running low. 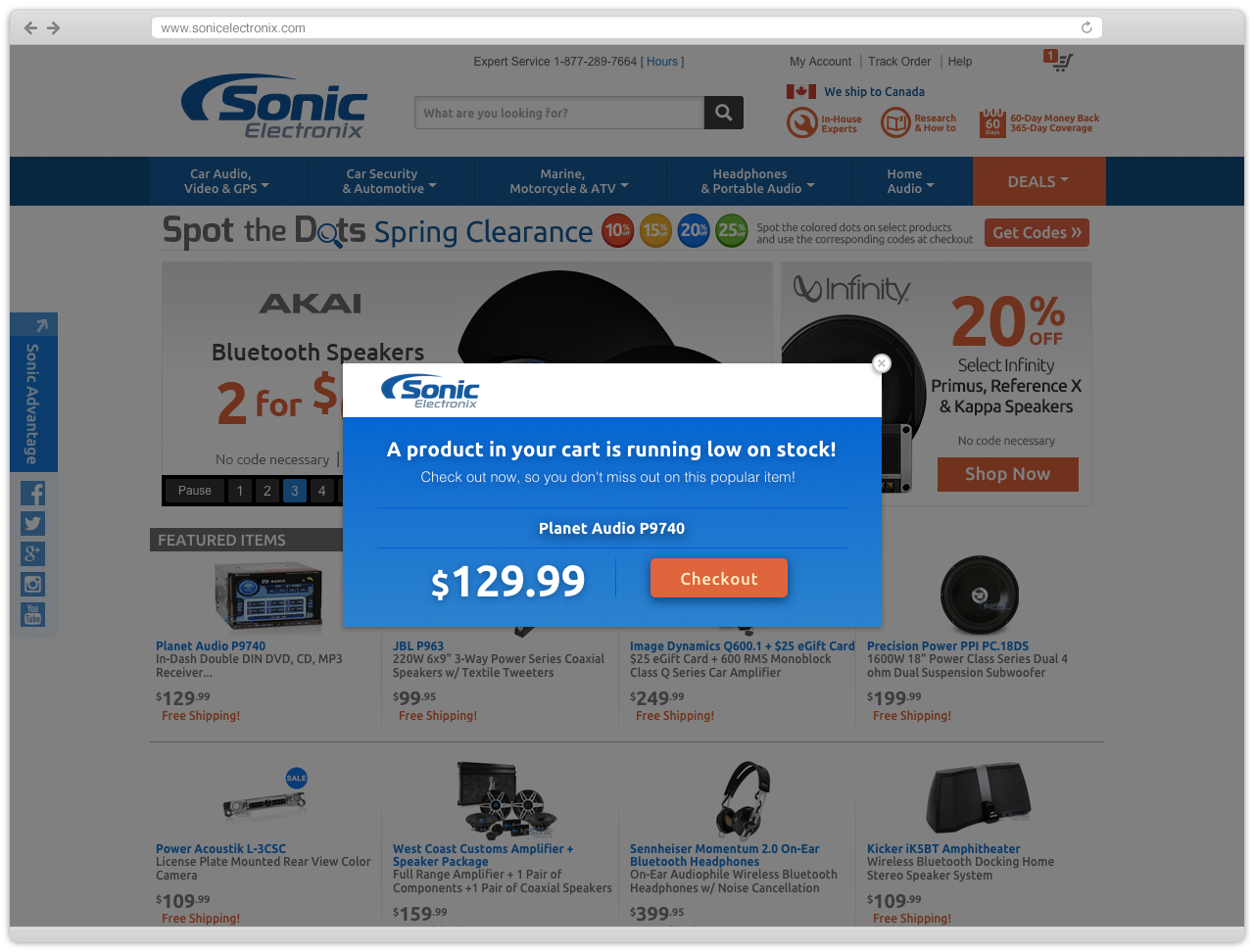 This is particularly effective because it’s targeting users who clearly already have interest in an item. They’ve already added it to their cart. Your reminder of its impending disappearance isn’t just good for your conversion rate; it’s good for them too. If they really wanted the item, they’ll appreciate knowing when it’s going to be unavailable.

Now that you’ve seen some of the most popular and effective tactics, it’s important to note that urgency doesn’t work all the time. Sometimes it actually negatively affects sales.

Urgency is No Silver Bullet (Beware or Trigger a Backfire Effect)

Urgency can decrease and also increase friction. As Viljo Vabrit said at ConversionXL Live 2016, “People can feel like they’re being forced to take part in a race they don’t care about. Urgency does not equal persuasion.”

If it’s a bad offer, it doesn’t matter how much urgency you add. Likewise, if you use urgency in a sleazy way, urgency might decrease conversions.

As Graham Charlton wrote for eConsultancy, “For me urgency is about helping the customer, or should be about helping the customer, rather than considering it a sales technique. The goal should be to provide transparency over stock availability to help customers decide how urgent the purchase is. Where it falls down is with retailers that run on deliberately low stock levels, and then the urgency message becomes effectively site-wide and impact is compromised.”

“Here’s what you don’t want to do. The prospect has spent a lot of time with your ad and you’ve convinced him or her to buy. The one thing you don’t want to do is blow your integrity at the very end of the ad by making a statement that is not true. A statement like, “If you don’t respond within the next few days, or we’ll be sold out,” or some other deceit will turn off the prospect, so be careful. Whatever you say at the end should be the truth and should be crafted to maintain the same integrity that has been expressed throughout the ad.”

Beware of artificial scarcity (especially with information/digital products). Wikipedia states that artificial scarcity “essentially describes situations where the producers or owners of a good restrict its availability to others beyond what is strictly necessary.”

Peep Laja received an email that is a funny example of fake scarcity and how it can backfire. 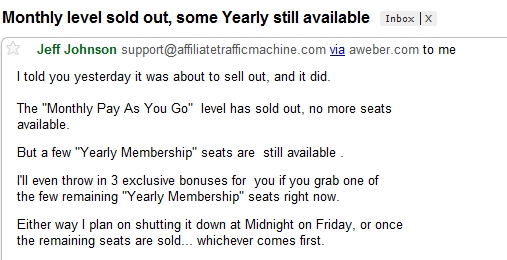 As he wrote, “Monthly access to a digital product sold out, yearly access still available? Come on! What does this do to your credibility? Not much, except people stop believing you. And that’s kind of important.”

Even some of those comparably amoral internet marketers on Warrior Forum think this is a scammy tactic.

And here’s another good thought from Warrior Forum. 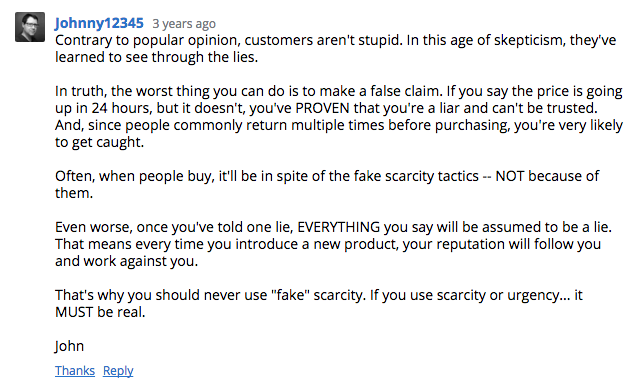 When info-marketers find a tactic too slimy to use, you should probably avoid it as well.

The second comment in particular is on point. Once you’ve been caught lying, your credibility as a seller plummets. Now everything you say is perceived through the lens of your disingenuity.

Top copywriters have known this well for years. They’ve long used urgency as a tactic, but they also know that without a sufficient offer and adequate information, urgency is simply not effective. Here’s what Joe Sugarman wrote in the Adweek Copywriting Handbook:

“You might have a great ad with a good sense of urgency but a fatal error might still kill your ad’s effectiveness. What is that fatal error? Omitting important information the buyer needs to make that buying decision. Then the buyer has the excuse, “There’s a question I have but I’m too busy to call and find out the answer,” or a similar reason. In short, even a great sense of urgency can be wasted if you leave out some critical information from your ad.

Keep the five types of implementation we covered above in mind as you look to add urgency:

And when you’re ready to implement, here’s how you make urgency work for you: 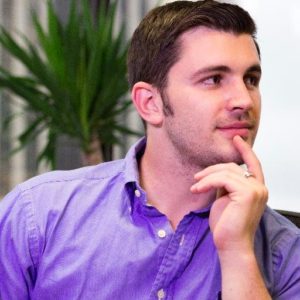 Alex Birkett is a Sr Growth Marketer at HubSpot where he focused on driving freemium user growth. He's based in Austin, Texas, but travels roughly half the time, speaking at conferences and flaneuring. Read his deep dive guides at alexbirkett.com.
All Posts